Asian cuisine is known for its variety of spices that create some of the most flavorful dishes in the world. Given their universal appeal, Asian spices have historically been used to add strong flavors to dishes of various other cultures as well.

There are hundreds of spices we could talk about here (because frankly, they’re all fantastic!). However, in our opinion, there are a few fundamental spices found in almost every Asian household. In this article, we’ll discuss those spices, what makes them significant, and provide one of our favorite bonus spices at the end.

Top Asian Spices and Spice Mixes [And What Makes Them Great]

The entire East Asian region has some spices that are common between cultures, and some unique to their own country’s cuisine.

Here, we’ll talk about a mix of all of them, especially the ones you’d find in a traditional Asian household.

MSG is a mainstay of Asian cuisine and has been for a very long time.

Falsely declared unhealthy in the US after a misguided medical report came out, MSG is slowly coming back into the mainstream as a major flavor enhancer. Good thing too, since it’s super-effective at what it does!

MSG can be used to upgrade the flavor of just about any food, from rice, grilled vegetables, and stir fry beef, to chicken casseroles.

What’s great about this ingredient is that it doesn’t change the flavor of whatever you’re making – rather, it makes it more prominent. For example, adding it to steak seasoning will actually make it taste meatier.

You can also adopt MSG as the primary flavoring agent in a high-protein or low-carb lifestyle. It also works great in keto Asian food as a salt and sugar replacement, since it has the taste effect of both.

A basic blend used in a variety of recipes, the Chinese Five Spice mix is commonly used in powder form during cooking.

This spice mix is a traditional Chinese recipe staple. It’s a combination of star anise, Sichuan peppercorns, cinnamon, fennel seeds, and cloves. The sweet and pungent spices combine to create a mixture that can turn any otherwise bland dish into a flavorful one.

A related version of this essential spice mix is used throughout India (garam masala) along with other regions in Asia. There’s also a version of this used in the Southeast of China that uses orange peel and Saigon cinnamon instead of cloves and Chinese cinnamon.

The mix is typically used in dishes that need a red or yellow sauce (curry). You can also use it as a dry rub on meat and fish recipes, such as roasted chicken or duck.

The spices in the mix can also be used separately, at various points of the cooking process. However, using them together creates a great base that you keep in a jar and use as a standard mix.

Chinese Five Spice is guaranteed to become one of your favorite seasonings for savory and spicy dishes.

Interested in trying this Five Spice flavor? Try our Spicy Beef ramen for an authentic taste.

Hearty, rich, and spicy. A broth that takes your tastebuds on a trip across the world. Brimming with notes of Sichuan peppercorns, anise, and fennel. 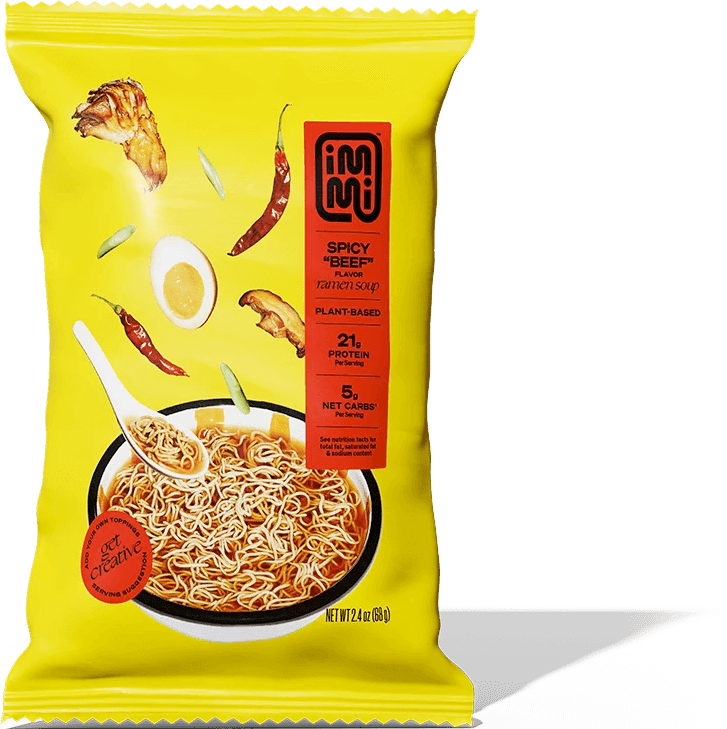 Also known as ‘Japanese Seven Spice’, this is another common spice blend, used in many Japanese noodle and meat recipes to add a savory heat.

What separates Japanese Seven Spice from Chinese Five Spice are the citrus and umami flavors that deviate from the typical savory taste that other spice mixes provide.

You can sprinkle Shichimi Togarashi on vegetables, plain rice, and eggs, or use it as a rub for grilled chicken and the primary spice component in a hot Japanese or Indian-style curry. It’ll perfume your food, add some heat (without turning it overly hot), and lend a hint of a sweet ginger tinge.

The mix is also super-versatile. For example, you can add it to a curry before, during, or after cooking, for different effects.

You can purchase Shichimi Togarashi from the store, but we recommend making it fresh by yourself.

A highly aromatic addition to various Taiwanese dishes, this peppercorn is perfect for adding both a fresh citrusy aroma and spicy taste.

Despite looking like a peppercorn, this is actually a seed that’s native to Taiwan. It looks a lot like whole black peppercorns but the taste is a mix of lemon, fresh ginger, and a milder black pepper.

The seed has been used in traditional methods among the indigenous communities in Taiwan for many, many years.

You can use it as a black pepper alternative in a sauce that needs bolder flavors. You can also use it while cooking something that uses lemongrass, ginger, and cinnamon.

This is another ingredient that’s best when used during cooking or ground up to add flavor to a dish. However, if you want to experience the flavor up-front, sprinkle it on some eggs or steamed vegetables for a taste upgrade.

In terms of overall usability, it’s among the top Asian spices due to how many dishes it can flavor.

This is the primary flavor in Chinese Five Spice powder due to its balance of strong flavor and sweet, fragrant smell.

While cinnamon is better to add sweet flavors, star anise is ideal for the aroma it imparts, which, like fennel, is a delicious combination of flowery and fruity.

It’s the preferred spice for Vietnamese and Thai dishes such as Pho and Khao Kha Moo, although its role in perfuming Indian rice, lentil, and gravy dishes is equally important. It’s a fundamental spice in Thai noodle broth bases.

Although the primary flavor profile is sweet, star anise does have a peppery licorice quality to it as well. This works really well in herbal tea with lime and mint leaves. Just be careful not to dip it in too long since the taste can become bitter if concentrated.

What’s great about star anise is that it’s just as good in desserts, especially milk-based ones. Break it up into individual leaves and cook it with the dessert base, as you would with cinnamon.

Overall, star anise makes for the ideal addition to your aromatic herb collection.

Turmeric is another essential Asian spice that’s used to add yellow or orange color in various regional cuisines around Asia.

This key Asian ingredient has a strong and almost mustardy flavor that has been described as earthy and bitter. It’s from the same family as ginger and galangal and can be used both dried and fresh.

Turmeric is used in a variety of signature Thai dishes such as Kaeng Lueang (Thai yellow curry) and Massaman curry. The similarities with galangal don’t end with there, since it’s also used in several notable Malay dishes such as Ayam Panggang Kunyit which is a grilled turmeric chicken.

Turmeric is famous in health-food circles for its anti-inflammatory properties. It’s consumed with coffee and other hot beverages.

Add turmeric to your spice cabinet and you’ll never have to worry about your dishes looking dull and colorless!

You’ll also get updates on immi, delicious recipes, exclusive offers, and more. No spam ever.

Sichuan peppercorns are the essence of Sichuan regional cuisine and are a variety of hot pepper with a delicious heat and flavor mix.

These peppercorns have a distinct flavor that’s similar to green citrus fruits and lemongrass, and a sharpness that’s similar to unripe lemon. It’s a nice little thing to add to your spice rack, especially if you like experiencing new flavors.

Sichuan peppercorns are used in a ton of dishes from the Sichuan region, including Shuizhu Niurou (Sichuan boiled beef) and Chongqin Mala (spicy stir fry chicken).

What makes Sichuan pepper awesome is how it pairs with spicy dishes (our Taiwanese spicy beef ramen is a great example!). The peppercorns are not spicy themselves, but they somehow elevate the flavor and numb the pure heat to where you can enjoy the food instead of fanning your mouth!

In addition to spicy dishes, you can use Sichuan pepper to make dipping sauces and chutneys.

A wonderful spice to cook with, Sichuan peppercorns can brighten up any subdued dish and work great with other strong flavors such as garlic, ginger, and citrus.

Dried ginger is another primary ingredient of Asian cuisine as a whole due to its mix of strong flavor and versatility.

It’s one of the very few spices that are just as good dried as they are fresh, if not better. In fact, dried ginger is accommodated much more than fresh ginger

Along with garlic, ginger is one of the main wet ingredients for sauces and spice pastes in Asian cuisine. It provides both flavor and body to gravies, depending on the amount you’re using and the consistency of the final product.

Additionally, you can use dried ginger along with the typical ‘dessert herbs’ such as cinnamon and nutmeg.

Overall, dried ginger is an ideal spice for adding a sweet, aromatic heat to your dishes. It can add incredible flavor to anything without there having to be chunks in your food.

One of our favorite spices that we love to add to our immi ramen is white pepper! We’ve found that white pepper lends a more well-rounded taste instead of the sharper heat of black pepper.

Although it’s the same berry, white pepper has much less of that pungent taste that you get with the black variety.

You could use white pepper as a replacement for black pepper in just about any dish. It’s super-versatile as a spice and doesn’t overpower the flavor of the dish you put it in.

Since white peppercorns are allowed to fully ripen and then fermented, they provide dishes with a more herby taste, as compared to black pepper. It also blends well with other ingredients, especially MSG.

Adding it to a simple bowl of ramen adds a unique kick that takes the flavor up a notch!